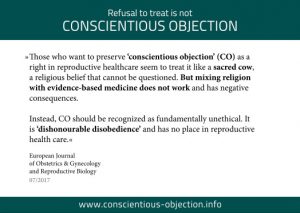 Abstract: A widespread assumption has taken hold in the field of medicine that we must allow health care professionals the right to refuse treatment under the guise of ‘conscientious objection’ (CO), in particular for women seeking abortions. At the same time, it is widely recognized that the refusal to treat creates harm and barriers for patients receiving reproductive health care. In response, many recommendations have been put forward as solutions to limit those harms. Further, some researchers make a distinction between true CO and ‘obstructionist CO’, based on the motivations or actions of various objectors.

This paper argues that ‘CO’ in reproductive health care should not be considered a right, but an unethical refusal to treat. Supporters of CO have no real defence of their stance, other than the mistaken assumption that CO in reproductive health care is the same as CO in the military, when the two have nothing in common (for example, objecting doctors are rarely disciplined, while the patient pays the price). Refusals to treat are based on non-verifiable personal beliefs, usually religious beliefs, but introducing religion into medicine undermines best practices that depend on scientific evidence and medical ethics. CO therefore represents an abandonment of professional obligations to patients. Countries should strive to reduce the number of objectors in reproductive health care as much as possible until CO can feasibly be prohibited. Several Scandinavian countries already have a successful ban on CO.